The little girl by the carousel

Lightning flashed across the dark sky, illuminating a lone dark figure by the large window. The big clock on the wall chimed ten times. “Its time” the figure said to no one in particular and turned towards the door. She picked up a brown package from the table and shoved it inside her jacket as she left the house. Outside, it was raining heavily and it was pitch dark, broken only by the intermittent flashes of lightning that lit up the whole street. She pulled the hood of the jacket over her head and walked on. She knew the street like the back of her hand, every pothole, every bump and could walk through it blindfolded. She was only twelve when she had left this place, but she would never forget the street. “Never”, she said aloud to herself.

She remembered the walks to the grocery store with her mom skipping along with her.  She remembered the park near the grocery store where she used to wait, while her mother would finish with the shopping. She remembered the carousel at the park, her favorite spot, with the red, yellow, white and green animals, especially the green one. She could never figure out what it was, so she pretended it wasn’t an animal at all and named it Mr. Boo. She used to love these outings, even more because while returning back, her mother always bought a Popsicle for her from the old man around the corner who only had four teeth in his mouth. She remembered counting them every time while her mother used to pay him and he would keep smiling toothily at them till they would turn the corner and she could no longer see him or his teeth.  She remembered the colorful liquid running down her arms into her shirt and making them sticky. When she used to mention it to her mother, she would only laugh and twirl her around. She remembered laughing with her, her mother had a beautiful laugh, mellifluous and lingering.

She shook her head discarding the old memories, she was on the main road now. She hailed a cab and got into it. The driver asked for the address and they drove on. She tried to dismiss the flashes of old memories that tried to enter her head, she had to concentrate on the work at hand, but she couldn’t resist for long. She remembered the books, the musty smell that used to invade her nose, whenever she would open a book under a torchlight after tiptoeing across the hall in the wee hours of the night, scared that she would wake up her parents.  Books had always been her favorite, still were, they were her solace. Her escape, her only refuge when her parents would fight.  She would get lost among the lines and strangely, she could shut out all the noises, the shouts, the angry outbursts, the crashing furniture. But she could never ever shout out the crying, her mother sobbing in the corner of the kitchen, an angry red mark on her face.

“Why is your nose like that Mr. Boo?”, she would ask. “That’s because I tried to hide an evil witches’s wand by swallowing it, but it went up and stretched my nose instead”, he would say ruefully, but it would make her laugh. “Don’t laugh little one,” Mr. Boo would say, ” I can do magic every time I sneeze and grant a wish.” “Are you getting a sneeze now Mr. Boo?”, she would ask everyday, expectantly. But Mr. Boo always shook his head.

The car stopped at the address with a screech and she was jolted out of her dreams. She looked up at the red brick house. Inside, she cringed, unsure of herself. The images came back, all a blur flashing in front of her one after the other. Her face hardened and she walked towards the house and rang the bell. She could hear him grumbling as he came to open the door. “Who the hell…. ” he started as he opened the door, but his eyes widened as he saw her and stopped. “You!” he exclaimed. “Yes father, I thought I would join you today.” she said, emphasizing on the word today. He looked at her strangely and then realization dawned on him, clearly reflected in those eyes, but there was something else too. It was fear.

“Oh good, so you remember.” She said, walking into the house. He took a seat across her, and looked at her warily. “Today, dad, today, when she had died or had committed suicide if I quote the police” she said. He stayed mum, the fear in him now palpable. “I used to love reading a lot……..” she started while he shrugged, unsure of where the conversation was going.

20th august 1998, the night was still, humid and stifling. She was tossing and turning in her bed, unable to sleep, she hadn’t been able to finish the book yet but it was bedtime. She had pleaded with her mother to let her finish the book. Her mother looked very drawn and haggard when she came to put her to bed, she hadn’t even bought a Popsicle while returning from the store that day, but had walked on grimly when the old man had tried to offer her one. She hadn’t even laughed that day, her laugh had become a thing that was seldom heard of nowadays, she was quiet most of the times, smiling rarely, going about her work like a robot.

She got up from the couch……..She got up from her bed and tiptoed into the hall, thinking her mother was asleep, her father hadn’t come home, which was also becoming common those days.

She tore the brown package and took out a gun, pointing it at her father’s head…… She heard angry voices downstairs and a bang and stopped. She peeped from the banister and saw her mother on the floor, a gunshot wound on her head. Even with her life ebbing away, with a great effort, she saw her mother turning her head towards her and giving her a reassuring smile that froze midway and her large eyes becoming lifeless. He didn’t notice her.

The wide fearful eyes of her father stared back her, now lifeless. She wiped the gun clean and placed it in her father’s hand as he had done fifteen years ago………..”Suicide” The policeman had declared the next day when they had come around and she had hung back, squirming in the shadows as everyone had sympathized with him. “Someday Mr. Boo, you will have to grant my wish”, she had thought.

As she walked out of the house, the whirring merry-go-round inside her head, coruscating flashes of red, yellow and green suddenly came to a stop. “I think I have a sneeze coming little one” said Mr. Boo, “Do you have a wish?”

Check out my other posts! 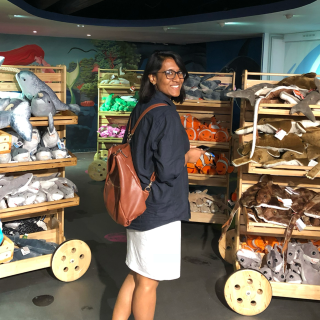 About me - I would like to say that I am a first-time mum, in my thirties. Currently residing in the UK, trying to navigate life one day at a time! I enjoy all kinds of food with a special penchant for things that are sweet! In my spare time I also like to read and sketch on my ipad.